The Most Important Thing – Howard Marks – Book Notes and Takeaways 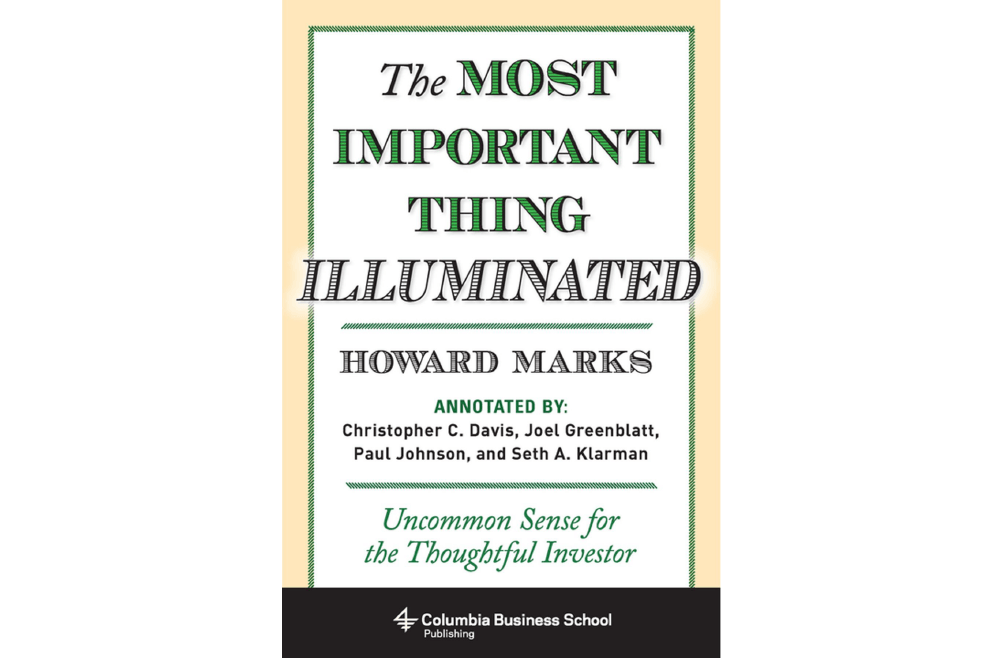 The Most Important Thing – Howard Marks

Financial theory should inform our decisions, but not dominate them

The two different schools of investing

Buying value, you can’t ever expect immediate success, often times you will find that the price will continue to decline after you have purchased

Investors with no knowledge of (or concern for) profits, dividends, valuation, or the conduct of business simply cannot possess the resolve needed to do the right thing at the right time.

Volatility is not the risk most investors care about

Rather than volatility, people decline to make investments primarily because they are worried about a LOSS OF CAPITAL or an unacceptably low return

The relation between different kinds of investment and the risk of loss is entirely too indefinite, and too variable with changing conditions, to permit of sound mathematical formulation – Ben Graham (mentor to Warren Buffett)

There is a big difference between probability and outcome.  Probable things fail to happen-and improbable things happen-all the time

Here is the KEY TO UNDERSTANDING RISK:

Many things could have happened in each case in the past, and the fact that only one did happen understates the variability that existed

The point: PEOPLE USUALLY EXPECT THE FUTURE TO BE LIKE THE PAST AND UNDERESTIMATE THE POTENTIAL FOR CHANGE

Bearing higher risk generally produces higher returns. The market has to set things up to look like that’ll be the case; if it didn’t, people wouldn’t make risky investments

When people aren’t afraid of risk, they’ll accept risk without being compensated for doing so, and risk compensation will disappear

***KEY***: There are few things as risky as the widespread belief that there’s no risk, because it is only when investors are suitably risk averse that prospective returns will incorporate appropriate risk premiums

Risk CANNOT BE ELIMINATED, it can just be transferred and spread

The recent crisis occurred because investors partook in novel, complex and dangerous things, in greater amounts than ever before

The truth is, the herd is wrong about risk at least as often as it is about return

When everyone believes something embodies no risk, they usually bid it up to the point where it’s enormously risky

Since there are usually more good years in the markets than bad years, and since it takes bad years for the value of risk control to become evident in reduced losses, the cost of risk control – in the form of return forgone can seem excessive

The prudent homeowners who carry insurance and feel good about having protection in place, sometimes regret paying for the insurance when there’s no fire

The road to long term investment success runs through risk control more than through aggressiveness.  Over a full career, most investor results will be determined more by how many losers they have and how bad they are, than by the greatness of their winners.  Skillful risk control is the mark of a superior investor

People are emotional and inconsistent

The cyclical process: The Ups

The cyclical process: The Downs

Whenever the pendulum is near either extreme, it is inevitable that it will move back toward the midpoint sooner than later

Reaping dependably high returns from risky investments is an oxymoron

CLIENTS MENTALITY:  When things are going well and prices are high, investors rush to buy, forgetting all prudence.  At the turn of the cycle, when prices have plummeted and chaos exists, assets are available at extreme bargains.  Yet, the herd loses all willingness to bear risk and continues to sell. And this will always be so because human instincts DO NOT CHANGE

Stages of a bull market

Just like the oscillation of cycles, we never know:

The first emotion that serves to undermine investors’ efforts is the desire for money, especially as it morphs into greed

Money may not be everyone’s goal for its own sake, but it is everyone’s unit of accounting

Nothing is easier than self-deceit. For what each man wishes, that he also believes is true

When we watch Peter Pan, we don’t want the person next to us to say “I can see the wires”