The Misogi completed by Duncan and friends is a spinoff of the true Japanese definition.

A true Misogi is an annual Japanese ritual purification process. It is something that is meant to purify the body and mind. Inspired by the likes of Jesse Itzler (Entrepreneur, Ultra-Marathoner) and Kyle Korver (NBA Basketball Player), the spin-off version is a reminder that we have an unbelievable capability in all of us.

On August 31st 2019, Duncan arrived at Jack Weaver’s house and told him to leave his phone, wallet, and keys at home and get in the car.

The two then drove to downtown Santa Rosa, where Duncan informed Jack that they were completing their 2019 Misogi and would be running from Santa Rosa, CA to Marin, CA a total of 32 miles. The added bonus was once they completed their 32 mile run they would immediately jump out of an airplane and go skydiving.

Neither had trained for this, nor run more than 13 miles at one time before. Also, neither had ever been skydiving before. They had no form of communication, ten dollars of cash, and six hours to reach the airfield. Five hours and twelve minutes later Duncan and Jack arrived at the airfield and jumped out of a plane.

Targeting September 2020, Duncan, Jack, and a new addition Peter Tiberio are planning a grueling 48 mile challenge at the Grand Canyon. The challenge is normally called peak to peak, where you start at one edge, descend, cross, and then ascend the other. This crew will attempt peak to peak to peak.

Down twice and up twice.

Adding to the team, Duncan and Jack recruited three new men to join the annual tradition. Peter
Tiberio, Colin Hawley, and Richard Herbert, all friends with Duncan from the USA Rugby Team, willingly signed on to take on the challenge. This year’s challenge was the Rim to Rim to Rim, or commonly known in ultra-running as the R2R2, at the Grand Canyon.

The challenge begins at the South Rim of the Grand Canyon with a nine mile 6,300 foot descent. Next up is ten mile trek across the base of the canyon which includes traversing the Colorado River and navigating the rocky terrain. Then the voyage gets fun with a seven mile and 7,200 feet of elevation climb up to the North Rim of the Grand Canyon. At that point it is 24 miles in. To complete the challenge, turn around and go back.

Starting at 3:15am Friday October 16th the team set out to complete the entire 48 miles and 13,500 feet elevation climb in a twenty four hour period. In a test of mental fortitude, it took the group 19.5 hours to complete the challenge. It was unanimously agreed by the group that this was the hardest thing anyone had ever done.

The 2020 Misogi accomplished exactly what it was meant to: remind each member just how resilient and gritty we are capable of being. When challenges get tough, fall back on events like this to get through the tough times. The group is looking forward to 2021 and the challenges ahead. 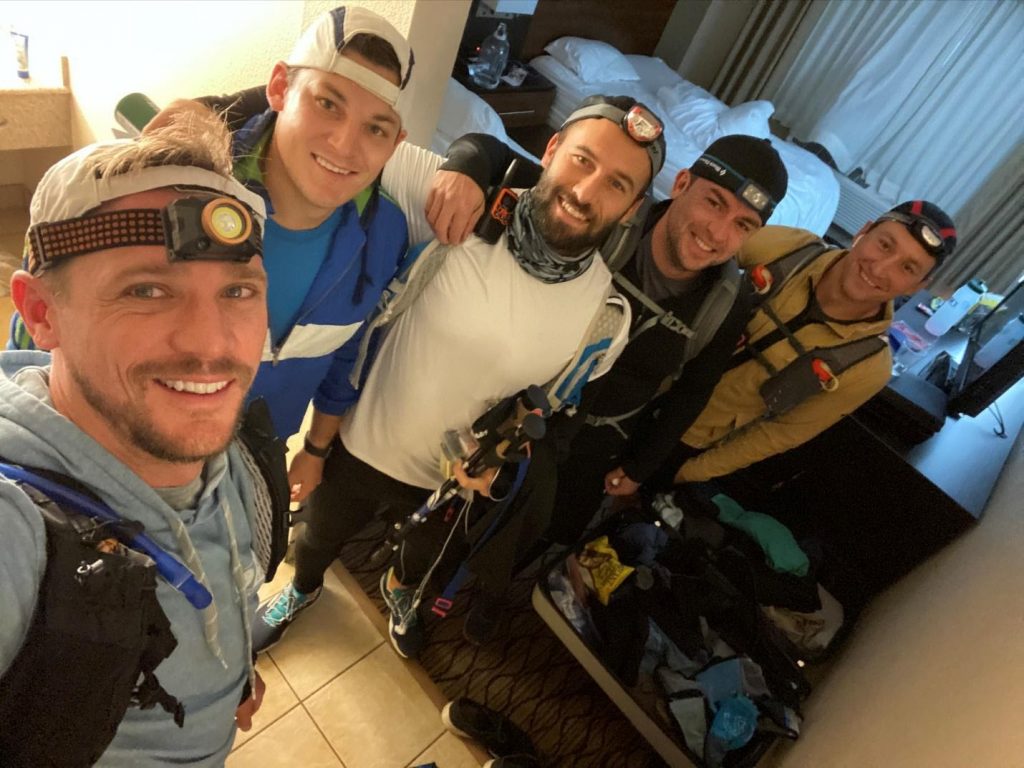 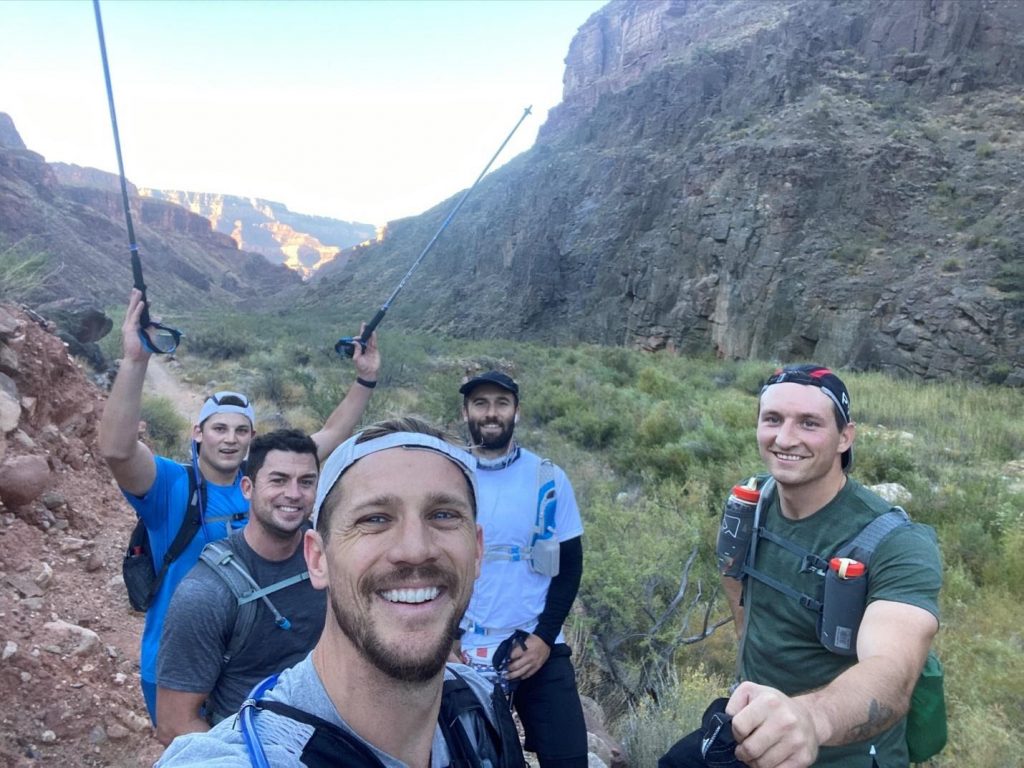 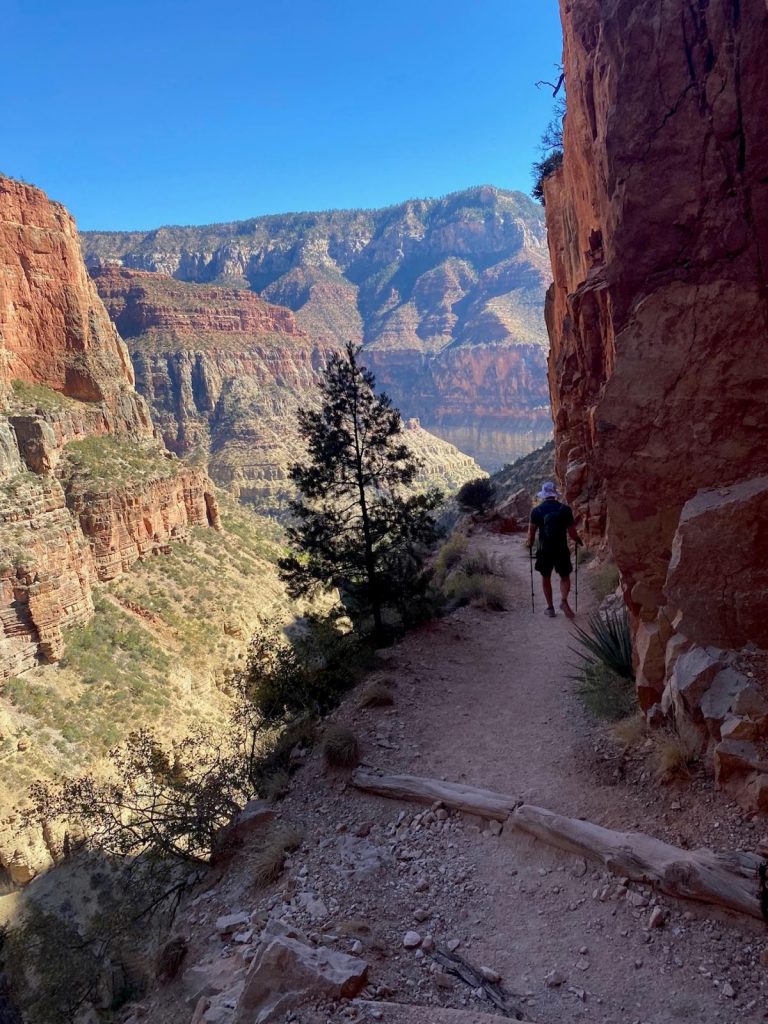 In 2021 the same five participated again. The challenge was originally set to take place in Alaska in August. Due to Camden Kelm (Duncan’s youngest child) being born prematurely, the group chose to postpone the event.

With time in the year running out, and with the days getting shorter and colder, the team pivoted to a challenge more local to Northern California. The group chose to complete a full Triathlon also known as a half Iron Man. While for many this might seem relatively simple, for five large, dense rugby players, the swim was a dramatic challenge.

The group completed the challenge in a gym for the swim and bike and then ran to a local watering hole 13.1 miles away to finish.

The 2021 Misogi again reminded the group how resilient we all are, and that if we set our mind to something we can push through almost anything.